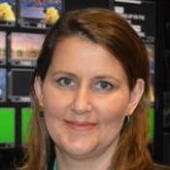 Rebecca has been involved in Rev since its inception. She a passionate supporter of independent film making and creating opportunities for filmmakers develop their skills and to show their works on the big screen.

She remembers the early years of Rev from the Greenwich Bar and Mojos in North Fremantle, many of the film makers in those early years have gone on to have successful careers in the industry.

For Rebecca, Rev is not just about nurturing and developing film makers, it’s also been a thriving training ground for many people behind the scenes in arts management, sponsorship, production management and marketing.

Rebecca has worked in the media industry for more than twenty years. She has a law degree from Notre Dame, an associate diploma in Broadcasting from WAAPA and a degree in Literature from Curtin University. She has also spent time at Harvard studying Organisational Change.

Her career started at the ABC as a cadet journalist and she’s covered many areas including finance, politics, legal and the arts. She has worked a lawyer at Mallesons Stephen Jacques and as a journalist at Channel 7. She also worked on sponsorship, marketing and done a lot of proof reading of the Rev program over the past 18 years.

Rebecca is currently Head of Operations for ABC News.