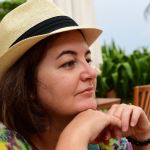 Suzanne Worner's diverse media career started with the Ten Network in the early 1990s. She has since then worked in a range of production and administrative roles in factual and lifestyle television, radio and television news and current affairs including 20+ years at the ABC.

Suzanne commenced as Director of Communications for the 2011 festival and, in 2013, took on the added role of General Manager. She is also Co-Director at UpBeat Events, Director of Brain Salad, collaborator for Cinema in Perth and chats about cinema on Curtin Radio on Thursdays.

In October 2021, Suzanne was elected as a Council Member for the City of Vincent and is Chair of the Arts Advisory Group and Rebound Roundtable and a member of the Reconciliation Action Plan.

Suzanne is the #1 Neighbours fan and her ultimate bucket list item is to appear as an extra in Harold’s Cafe.

Suzanne is a graduate of the Central Institute of Technology's School of Art and Design.