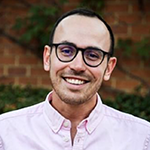 Leslie is an enthusiastic and dedicated lover of all aspects associated with the art of film and filmmaking. This is Leslie's fifth year as a proud member of the Revelation Perth International Film Festival; a film festival boasts uniqueness and creativity in the spectrum of film. Over the last several years Leslie has gained experience in directing, producing, writing and distribution, working alongside many of Perth's talented film creatives.

Leslie is currently completing his Masters of Screen Studies at the WA Screen Academy, majoring in producing and minoring in screenwriting. Leslie has recently completed a Screen Australia Attachment through SBS under the mentorship of Hannah Ngo & Melissa Kelly and worked as a note-taker in the writers’ room for an upcoming tv-series directed by Nicholas Verso and produced by Tania Cambers.