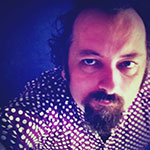 As a curator and film programmer Jack Sargeant has worked on the Revelation Perth International Film Festival since 2007. He started curating film events in the 1990s, having already organized live music, performance art and fine art exhibitions since the late 1980s. Over the years he has been invited to curate at numerous festivals including the Brisbane International Film Festival, Chicago Underground Film Festival, New York Underground Film Festival, WNDX Winnipeg, the London Underground Film Festival and many others, he has programmed retrospective film seasons across the world including screenings at the Institute of Contemporary Art, London, the Royal Film Archives, Belgium, ATA, San Francisco and ACMI, Melbourne. As a curator of fine art and photography he has collaborated on numerous events and exhibitions, most recently co-curating Untitled (coll. Atrocity Exhibitions) at Sydney’s Alaska Gallery in 2012.

As an author Jack Sargeant’s work has been described as "dangerously inspirational" by Six Degrees magazine, his numerous books include Deathtripping: The Extreme Underground, Naked Lens: Beat Cinema (like Deathtripping now in its third English language edition), Cinema Contra Cinema and Suture. His most recent book Against Control focuses on the work of William S. Burroughs. He has just edited a special film edition of the journal Abraxas due for publication in 2014. He has contributed essays on film and culture to numerous books, anthologies and journals, most recently on the underground films of Jon Moritsugu and the representation of Melbourne suburbs in crime movies. He contributes a regular column to FilmInk, and has written articles for The Wire, Xochi 23, Fortean Times, World Art, Real Time, Metro and many other publications. Jack has written introductions for books by Lydia Lunch, Romain Slocombe, Joe Coleman and for William Burroughs’ Unforgettable Characters. His writings have also appeared in the booklets accompanying numerous DVDs in the USA and UK, including the BFI release of Jeff Keen’s films and the Industrial Records Throbbing Gristle DVD box set.

Jack has frequently appeared as a documentary interviewee, appearing in films including Blank City, The Advocate For Fagdom and Llik Your Idols. He also appeared in Jon Hewitt’s hardboiled thriller X released in 2011. He is regularly called upon to assist in research for television and film documentaries. He also appears as a DVD extra on the American release of the Burroughs influenced underground movie Decoder, on which he also assisted in the subtitling. Jack has lectured on underground film and culture, independent cinema, underground art, beat culture, William Burroughs and many other topics across the world.

He recently completed his PhD.