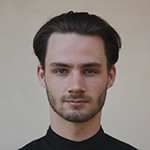 Jack Gilmour is just starting out his career in the film and television industry through his studies at Edith Cowan University. He has worked on several small film sets in various roles but hopes to be behind some of Australia’s most successful films in the future.

Whenever he isn’t lending his helping hand to another, Jack is enjoying one of the many films on his watchlist in the hopes he will one day catch up to everybody else. His favourite being ‘It’s Such a Beautiful Day’.

With only a year of experience on the Revelation team, Jack strives to provide as much support as he can such that the festival runs with ease and is enjoyable for each and every attendee.