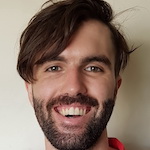 Fun Fact: I watched half an hour of Terminator 2 every school day from the ages of 3-6 years old.

"By far, his favourite film throughout his early childhood was Terminator 2, a somewhat unusual choice for a 3 year old" - My Mum

Anita Haygarth was the driving force of my obsession for film from a young age. Each day was a new movie in the Haygarth household, giving absolutely no regard to the parental guidance ratings. This young childhood submergence in to film, would later drive me to such things as- seek out a job at Luna cinemas, study film at Curtin University and annually film for a charity group in Vietnam- among other things.

The film industry is not an easy business to be in. It's full of hard working men and women who put blood, sweat and tears in to a creative vision- not for financial gain, but because they love the art. I'm incredibly proud to be a new member of the Revelation Film Festival team and to be a small cog in this giant, collaborative artistic-wheel.