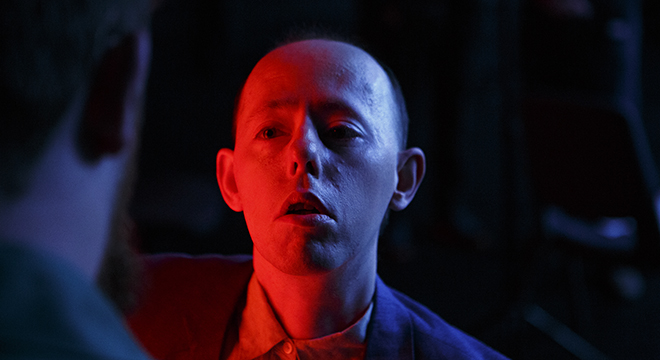 Revelation and DADAA present a special screening of SHADOW at the DADAA Cinema! The film will be open-captioned and audio-described.

Every once in a while, a film appears that blows a bracing wind that it forces you to consider storytelling in ways that you hadn’t considered previously.Shadow is that kind of film.

Simon, Scott and Sarah, a trio of activists with intellectual disabilities, hold a town hall meeting about the future impacts of artificial intelligence. Simon, considering himself a saviour for the community, quickly appoints himself the mayor, and Scott reluctantly steps into the role of facilitator, but soon becomes enamoured with his own power and begins to dismiss the experiences of others. Sarah, often overlooked and underestimated by her counterparts, explodes, confronting the self-appointed leaders on their inadequacies.

What begins as a polite discussion quickly descends into bickering and chaos, seemingly provoked by a force within. Sarah acts to unite the group, only to realise the battle to get their message across may be lost already.

In its structure, simplicity and authenticity, it’s simply a knockout.

The DADAA Cinema is located in the Old Fremantle Boys’ School building. There is limited street parking and the closest car park is the City of Fremantle carpark 6A on Adelaide Street. Entry is off Point Street.

DADAA is approximately a 10 minute walk from Fremantle Train Station and accessible by bus.

Entry Instructions – Entry to the Cinema is on the Cantonment Street side of the building.

Toilets – There are accessible toilets in the DADAA building.

The film is open captioned and audio-described.