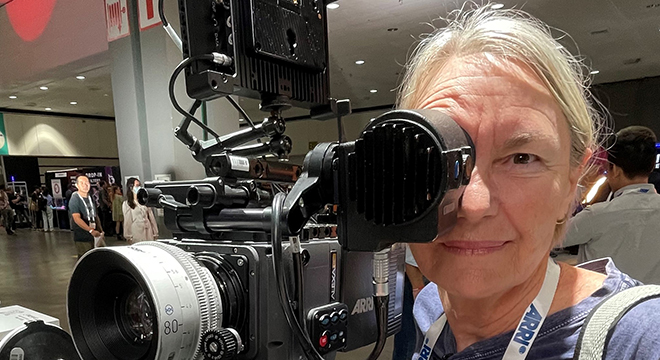 Angry and fed up about the lack of gender diversity in some sectors of our industry? A panel of cinematography, sound and composition practitioners discuss diversity, industry culture and mental health issues affecting the screen industry sector – and what we need to do to change it.

This event arises from a new study that has found that less than 10% of Australian films feature female cinematographers, sound recordists and composers. Many in the industry are pretty fed up that this is STILL the case, after years of campaigning for change.

Cinematographer Erika Addis is, in 2022, the first woman to be President of the Australian Cinematographers Society (ACS). She previously served as National Vice-President and Queensland State President. In 2012 she was the founding Chair of the ACS Women’s Advisory Panel, which evolved in 2021 to become the Diversity, Inclusion and Reconciliation working group.

Most recently she was the inaugural Head of Cinematography at Griffith Film School and in this time, she was a founding member of the Standing Committee on Equity, Diversity and Inclusion of CILECT (the international Film School Association). She has served as President of Women in Film and Television (WIFT) both nationally and in NSW, and mentored numerous emerging cinematographers and filmmakers.

Erika is widely recognised for her work behind the camera and also in the classroom, and, in an area still heavily dominated by men, she has been a trailblazer and mentor for women in camera for some 40 plus years.

Erika started her career in cinematography as a clapper loader working with Geoff Burton ACS on Stormboy, and went on to study cinematography at the Australian Film and Television School (AFTRS) in the late 70s.

Soon after completing her studies, she was busy filming on 16mm long form documentaries including For Love or Money, experimental films such as This Woman Is Not A Car and With Inertia and dramas including My Life Without Steve made on a tiny budget with Australian Film Commission funding and shot almost entirely on 35mm short ends. Her early documentary projects included Tokyo Rose North, Something Creative, The Tightrope Dancer and Kylie Tennant.  She combined producing with cinematography on the widely acclaimed Serious Undertakings before returning to focus solely on cinematography.

After assisting on drama features, she chose to specialise in documentaries, and has shot all over the world from Antarctica to Eritrea to Mongolia. She has filmed state and national leaders, internationally acclaimed artists and ordinary people with extraordinary tales to share. These works include Emily’s Eyes, For All the World to See, My Own Flesh and Blood, Father’s Footsteps, Mama Tina, Hatred, Mao’s New Suit, Speak Quiet Speak Strong, Brazen Hussies, The Children in the Pictures and many more.

She aims to makenstrong stories about passionate people that engage and move audiences and hopefully help to make the world a little better place.

Wendi is an award winning Sound Editor/Designer with her credits including Jack Stein: Born to Cook, On Country Kitchen, Hidden Light, Shock Art, #On Assignment and Our Footsteps. As an Editor she has worked on Extreme Animal Transport, Surfing the Menu, Shock Art, On Country Kitchen, Jack Stein: Born to Cook and Indigenous Community Stories. Wendi specializes in Photography, particularly travel photography and children at play, with her works being displayed in exhibitions and on websites. Wendi is a lecturer in Location and Post Production Sound, a Sound Recordist for Today Tonight, and has been a judge at the WA Screen Awards 7 times.

Ash Gibson Greig has composed the music to over 170 hours of TV series, documentaries, features, and short films (including for Who Do You Think You Are, The War That Changed Us, Jandamarra’s War, Itch, Blue, and Drain the Oceans). Ash has won 2 AACTA Awards (Whiteley, Desert War) with a further 3 nominations (Singapore 1942, Jandamarra’s War, Blue), two APRA/AGSC Awards (Whiteley, Iron Bird) with a further 9 nominations, and 6 W.A. Screen Awards. Ash also won a Green Room Award for his work on Malthouse Theatre’s Picnic At Hanging Rock, and has also worked with Black Swan State Theatre Company, Queensland Theatre, and Sydney Theatre Company. Ash was composer for the acclaimed 2017 Perth International Arts Festival opening event, Boorna Waanginy: The Trees Speak, the PC/console games Battlestar Galactica: Deadlock and Warhammer 40,000 Battlesector, the animated feature film 100% Wolf, and the arranger for Perth Symphony’s hit Nirvana Reimagined concerts.

Cathy Henkel is Director of the WA Screen Academy at Edith Cowan University. She worked as a documentary producer/director and writer for over 30 years and is founding director of Virgo Productions. Her work is focused on inspiring, positive, global stories with cross-platform delivery, engaging audiences through cinema, television, online and education platforms.

Cathy’s credits include The Burning Season (ABC, BBC, CBC, PBS, National Geographic, IF Award for Best Documentary 2008, nominated for an Emmy), I told you I was ill: Spike Milligan (ABC, BBC1, RTE) and The Man who Stole my Mother’s Face (Broadcast in 26 countries, IF Award and Tribeca Film Festival Award for Best Feature Documentary 2004). She has won numerous other awards including SPA Documentary Producer of the Year (2009), an ACS Award, an Emmy, AFI, ADG and SPA nominations.

Cathy’s latest film, Laura’s Choice, co-directed with Sam Lara, won the inaugural WA Screen Culture Innovation in Feature Documentary Award (2021). It was broadcast on ABCTV in March 2021 and is currently on iView.